Jon Kabat-Zinn received his Ph.D. in molecular biology from MIT in 1971 in the laboratory of Nobel Laureate, Salvador Luria. He discovered meditation in the mid-60s.

The Guardian wrote of Kabat-Zinn, "The once 'very macho' anti-war activist who raged against MIT’s role in nuclear weapons research is the catalyst behind the west’s mushrooming interest in mindfulness meditation, having reimagined Buddhist contemplation practices for a secular age almost 40 years ago...

"...Mindfulness courses ultimately derived from his work are now being rolled out in the UK to school pupils, convicts, civil servants and even politicians. It is prescribed on the NHS in some areas to prevent recurrent depression, with 2,256 people completing eight-week courses last year. The course reduces the likelihood of relapse by almost a third, according to an analysis of nine trials. In the US, the NBA basketball champions, Golden State Warriors, are the latest poster boys for the practice after their coach, Steve Kerr, made mindfulness one of the team’s core values."

Minds Unlimited ( mindfulnessgruppen.se) has a series of videos posted in which Jon Kabat-Zinn presents Mindfulness: 9 Attitudes. These follow below, or can be seen combined on YouTube.

In 2015, Jon Kabat-Zinn spoke at a Mindfulness Retreat sponsored by Middlesex School In Concord, Massachusetts.

Check out the book,
available in print and audio. 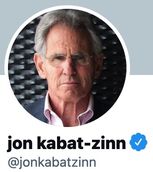 Jon Kabat-Zinn, in many ways, is the father of mindfulness practice in the United States. Though meditation goes back centuries, Kabat-Zinn was pivotal in popularizing it and showing its scientific basis and value. In 1979 he founded the Stress Reduction Clinic at the University of Massachusetts Medical School and later founded the Center for Mindfulness in Medicine, Health Care, and Society there. He's authored a series of popular books, one of the best known being Wherever You Go There You Are.