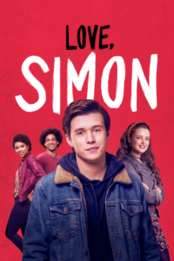 Images above are screen grabs

Love, Simon was released in 2018 and shown in mainstream theaters around the country. It's a heartwarming film, described as a comedy — and it is funny — but it's also powerfully real at the same time.

Simon is a high school kid in Atlanta, Georgia, who describes himself this way:

"My name’s Simon, I’m just like you. For the most part my life is totally normal. I have a family I actually like. And then there’s my friends. We do everything friends do. We drink way too much iced coffee while gorging on carbs. So, like I said, I’m just like you. Except I have one huge-ass secret. Nobody knows I’m gay."

I could run some spoiler clips below, but I won't. You gotta check out the movie and watch it in full. It's fun.

There are a few interesting stories behind Love, Simon. One is that the brother of lead star Nick Robinson came out in real life during while the movie was being filmed.

Meanwhile, co-star Keiynan Lonsdale — Braff in the film — was struggling with his real-life sexuality while the film was being shot. He came to the producers, cast and crew at the warp party when filming was done.

2017 and 2018 were landmark years for LGBTQ+ cinema! Three watershed films came out: Love, Simon; Call Me By Your Name; and Boy Erased. I cover these here plus I look back at the history of gays in film.

But I don't stop there. Click the the boxes immediately below for curated collections of videos you can watch right here. You'll find short & independent LGBT films and commercials featuring gay themes and characters. Enjoy!

Call Me By Your Name, released in 2017, is a very different film than Love, Simon. It's longer, slower and much more serious — and very powerful. The final scene between father and son is exquisite.

The story takes place in Italy where 17-year-old Elio lives with his parents. His father is a professor of Greco-Roman culture that hires an assistant/intern each summer. This year, set in 1983, the assistant is Oliver, a 24-year-old American. Slowly a relationship builds between Elio and Oliver.

The film earned several Oscar nominations including Best Motion Picture of the Year. James Ivory won the Oscar for Best Adapted Screenplay. His other work includes Maurice, A Room with a View and Remains of the Day.

Don't miss this one!

Call Me By Your Name

Boy Erased is a powerful film based on the real-life experience of Garrard Conley. It features a stellar cast including Nicole Kidman, Russell Crowe and Troye Sivan. Conley is played by Lucas Hedges who earned a Golden Globe nomination for Best Performance by an Actor in a Motion Picture.

Conley is gay and was sent by his family to undergo Conversion Therapy to become heterosexual. This "therapy" is based on the underlying assumption that homosexuality is a mental disorder that can be cured. Fundamentalist Christians are the primary proponents of Conversion Therapy as it fits nicely with their prejudiced and pseudoscientific notions about homosexuality. The videos below include a Ted Talk by Conley about his experiences.

Singer/Songwriter Troye Sivan appears in the film. He started out doing a vlog on YouTube which today has just under 7 million subscribers. He came out publicly on YouTube in 2013. You can watch his announcement on my Coming Out Stories page.

And there were the promotional interviews.

This report appeared on ABC News.

History of Gays in Film

Vito Russo wrote the definitive work on gays in motion pictures. First published in 1981, Russo's The Celluloid Closet is an encyclopedic review of how LGBTQ+ people had been portrayed in movies up till then. These portrayals told the general public who gay people are and how to feel about them — and worse, they told us who we are and how we should feel about ourselves. Which was not too good because gays were invariably sick, demented, evil and unhappy, and usually died by the final reel.

In 1995, The Celluloid Closet itself became a movie in documentary form. It features interviews and commentary by people including Lily Tomlin, Tony Curtis, Whoopi Goldberg, Quentin Crisp, Armistead Maupin, Gore Vidal, Shirley MacLaine, Tom Hanks, Harvey Fierstein and others. It's a must-see if you have a serious interest in this subject.

Vito Russo was also an activist beyond just his book. Vito, a documentary about his life and work, was released in 2011. Immediately below are trailers for the two documentaries and a clip with Michael Schiavi, professor of English at the New York Institute of Technology, talking about Russo. Finally, I've included a third-party presentation on the History of Homosexuality on Film.

Garrard Conley discussed his real-life experience in this Ted Talk.

These are two interviews with Troye Sivan.

There are so many films with LGBTQ+ characters and themes I could list here. The following are just a few of my top favorites. This just scratches the surface. Starting off the list is my all-time favorite gay film. The rest are listed in no particular order.

Latter Days is my absolute top-favorite gay film and the only one that I count in my top-10 favorite movies of all time, across all genera. The cast includes Joseph Gordon-Levitt, Mary Kay Place and Jacqueline Bassett. The movie begins with Mormon Missionary Aaron Davis (Steve Sandvoss) arriving in Los Angeles, one of those boys on the bikes who proselytize door to door. Elder Davis and his missionary companions move into an apartment next to gay neighbor Christian Markelli (Wes Ramsey) — and drama ensues.

One scene stands out as my favorite as it reflects my view of spirituality. It takes place early in the film when Elder Davis encounters Lila, played by Bissett, crying outside a hospital. Her companion — "Never my official husband," she says — has died. Elder Davis tries to comfort Lila with his vision of God, the meaning of life and our interlocking journeys here on Earth. This scene and the trailer follow.

Great film. Unfortunately I don't know any place to officially stream it online. There's a full copy on YouTube that's been posted by a third party (I think) since 2016. It's not been deleted, so perhaps it's OK. This is the trailer.

This film can be rented and streamed on YouTube. It's also available through iTunes.

This film can be rented and streamed on YouTube. It's also available through iTunes.

Everyone knows this film! A masterpiece. Rent to watch on YouTube. Also available at iTunes and Amazon Prime.

This film can be rented and streamed on YouTube. It's also available through iTunes and Amazon Prime.

This film can be rented and streamed on YouTube. It's also available through iTunes and Amazon Prime.

I'll close this collection with Making Love from 1982 starring Kate Jackson, Harry Hamlin and Michael Ontkean. I haven't seen it since it was first released and kind of wonder how it stands up now. At the time, though, this movie with reasonably big name actors was a big deal. I lived in LA at the time it was filmed and remember driving past places where they were filming. I'm not aware of any place it can be streamed officially online, but a full length version is posted to YouTube by a third party. It's been there since 2013 and so it might be OK.

So, what are your favorites? Let us know on my Feedback Page.

This film is available at iTunes.

My Award for Best Feature Film